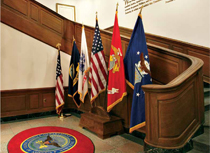 On Time, On Budget and Built for the Next 50 Years

The Pentagon is the largest low-rise office building in the world, and its renovation was the most complex in contemporary history. Completed at top speed in 1941 as the United States prepared to enter World War II, the Pentagon has remained much the same even as the military has evolved. The mechanical, electrical and plumbing systems, for example, were completely inadequate for the needs of contemporary office workers. After all, at the time of the Pentagon’s construction, information technology was barely a dream.

With the deterioration of the building infrastructure came constant problems. For example, facility maintenance crews reset more than 100 electrical breakers or fuses every day. The struggle to accommodate more people than the original design envisioned was compounded by workspaces that were not only inadequate, but had been configured on an as-needed basis without cohesive or consistent planning. Renovation was clearly needed.

In 1992, the U.S. Army Corps of Engineers launched a modernization program. The project was contracted on a design-bid-build basis, with multiple contracts for the utility infrastructure and each of the five wedges. But by 1998, serious budget and schedule overruns were endangering the project. Something new and different was needed.

Walker Lee Evey, a contracting officer at the time and later CEO of DBIA, pioneered an innovative design-build contract that would combine the wedges under a single contract with a single line of responsibility. The design-builder was called upon to deliver a structure that would not only fill the needs of the Department of Defense in the late 20th century, but would be able to adapt to its changing missions and needs into the next.

The new contract was conceived and the request for qualifications (RFQ) issued in late 1999. The procurement method was not the only innovation. Where most federal RFQs/RFPs run thousands of pages with drawings and design specifications, this proposal was a mere half-inch thick. It was a set of “performance guidelines,” giving interested firms the opportunity for innovation. The project presented a challenge: Design and then build a new vision of the Pentagon, one that would keep the historic structure, while enabling it to meet the needs of the future. Staying on budget and on schedule would also fall to the design-builder.

The contract for Wedges 2 through 5 was awarded on Sept. 14, 2001, to the Hensel Phelps Construction Co., just three days after the attack on the Pentagon. At that point, two facts were clear: The completed renovations at the site of the plane crash proved their worth, and the renovation of the rest of the building needed to be completed more quickly than originally planned.

The section of the Pentagon struck by the plane had been renovated after the Oklahoma City bombing in 1995. Hardening the structure, by including blast-proof windows and installing Kevlar in the walls, helped minimize the human toll of the terror attack. The same antiterrorist measures, and more, were planned as part of the modernization of the remaining four wedges. With proof that the center of the nation’s military could be attacked, the Hensel Phelps team had to complete the project on a shorter schedule. The contract originally called for the renovation to be completed in 14 years. After 9/11, that schedule was reduced to four years.

At this point, the contract’s flexibility and the design-build team’s dedication and originality came into play. The team planned every phase of the work for maximum efficiency. The usual renovation practice would be to move all staff out of one wedge, complete that wedge, move everyone back and then repeat for each segment. Instead, the Hensel Phelps team developed a phasing scheme that moved people to and from swing spaces and other sections of the building within 17 overlapping phased turnovers. Other government contractors installing communications systems and moving furniture were also able to use this method for efficiency. The team refined their design and phasing so that there was almost no disruption of MEP services to any of the tenants during the project, an unusual accomplishment. This process also allowed the Pentagon’s leadership, including the secretary of defense and Joint Chiefs of Staff, to enjoy a smooth, phased move, permitting them to continue their important work with minimum interruptions.

Throughout the project, Hensel Phelps adapted systems to improve communication, collaboration and team efficiency. The team motto became, “On time, on budget and built for the next 50 years.”

Hensel Phelps systematically resequenced the design effort to support construction, while still allowing for a proper design review process. It developed a short interval production scheduling system, known as SIPS, by analyzing the design and construction process for common, repetitive elements. Hensel Phelps grouped related activities into five-day workweek blocks that were then organized to produce a constant and predictable flow of work. The SIPS blocks were arranged into a “SIPS train,” which, once started, progressed through the entire sequence of activities until completed. These simplified scheduling and disseminating plans aligned the design and construction teams and produced a highly effective and very fast-paced project.

Another element that aided schedule compliance and enhanced team interaction was consolidating the field offices. All owner, architect, A/E, general contractor and major subcontractor personnel worked out of what was called the “20-wide.”

In addition to innovative design and construction processes, the team developed a universal space plan (USP) for the Pentagon. The USP provides a flexible use of space that can be quickly reconfigured to accommodate changing needs. Hensel Phelps used the concept of “flexibility through rigidity” to pre-define workspace configurations that allow for different needs while staying within the floor plan. As needs and personnel change, the office areas can be reorganized quickly, without disrupting the overall plan.

Hensel Phelps also used building information modeling, a new innovation at that time. While not required in the RFP, it was an added value that allowed the team to produce as-built documents.

The emphasis on sustainability was also innovative. Wedges 2 and 3 achieved LEED® certification, Wedge 4 silver certification. And at the time this was written, Wedge 5 was under review by the U.S. Green Building Council for certification.

The final project met its design mandate. It stays true to the Pentagon’s historic past, but embraces the future with innovative and flexible elements to anticipate as yet unknown needs. Designed to provide a comfortable workplace for a large workforce (25,000 at the time), with the most stringent antiterrorist protections possible, we can expect the Pentagon to stand strong for another half century.