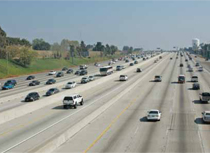 Public-Private Gets the Golden State Moving

Design-build is in the works for two southern California freeway projects.

The California Transportation Commission (CTC) has authorized two new freeway projects to proceed under the Golden State’s design-build program. The State Route 91 Corridor Improvement Project and the LA Metro/Caltrans ExpressLane Project are the first design-build plans approved by the CTC under the provisions of SBX2 4, the 2009 state bill permitting regional and local agencies use of public-private partnership contracts.

After reviewing several feasibility studies, the Riverside County Transportation Commission (RCTC) decided design-build could significantly shorten the SR-91 Corridor Improvement Project’s completion time — by three years — compared with the design-bid-build schedule. The RCTC called attention to the greater potential for value innovation and flexibility that a design-build contract provides over the traditional method. The SR-91 Corridor Improvement Project will widen a 14-mile stretch of SR-91, extending the Orange County Transportation Authority’s express toll lanes on SR-91 eight miles farther east past I-15 in Riverside County, Calif. A general-purpose lane will be added to the toll lanes, expanding the entire SR-91 corridor between SR-71 and I-15 to a massive seven lanes in each direction. State Route 91 is the main east-west route connecting Orange and Riverside counties; the proposed expansions are expected to reduce traffic congestion and improve safety in this major traffic corridor.

The design-build contract price is $794 million, while the total cost has been placed at $1.3 billion. A short list of qualified preproposers was released on January 6. According to the RCTC, approximately 20,000 jobs will be created by the project, including some permanent positions connected with the toll expansions.

A consultant has been appointed to oversee the design-build process, with environmental approval expected before the end of 2011. Once the design-build contract is awarded, construction is expected to begin by the first quarter of 2012. The toll lanes should be open to traffic during summer 2016.

The LA Metro/Caltrans ExpressLane Project is a partnership between the California Department of Transportation and the Los Angeles County Metropolitan Transportation Authority to convert selected high-occupancy vehicle (HOV) lanes in the state highway system into dynamically priced high-occupancy toll (HOT) lanes. The U.S. Department of Transportation awarded $210 million to this project, one of six programs nationwide designed to test the effects of different demand-pricing tolls on congestion.

Once under way, the project will convert the HOV lanes on the I-110 freeway into HOT lanes, including the lanes from I-605 to Alameda Street and from Adams Boulevard to 182nd Street. The toll system will use dynamic pricing to keep traffic flowing during peak hours; prices will reflect the volume of traffic at any given time. Expected to employ 2,400 workers, the LA Metro/Caltrans ExpressLane Project also entails construction of a new bus center and the addition of 57 buses. The El Monte and Pomona transit stations will be expanded, while a new station is to be built at Patsaouras Transit Plaza.

The transit authority settled on design-build delivery, noting that it was the most efficient method for getting the toll lanes operational. State tolling authority has already been awarded for this pilot project. In December, the design-build-operate-maintain (DBOM) contract was awarded to Atkinson Contractors, LP, of Foothill Ranch, Calif.; toll lane completion (fully converted and operational) is set for August 1, 2012.