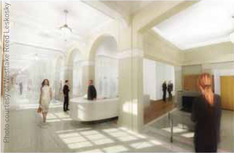 The 92-year-old (and still fully functioning) Wayne N. Aspinall Federal Building and U.S. Courthouse in Grand Junction, Colo., is slated to become the country’s first net-zero energy usage historic building. “This project is part of the American Recovery and Reinvestment Act (ARRA), with a primary goal to help the country’s economic recovery, as well as to create more energy-efficient buildings and try our new technologies,” says Mike Owens, the U.S. General Services Administration’s (GSA) Regional Recovery Executive. “Grand Junction was one of those projects selected that needed infrastructure work.”

Not exactly the stereotype of bureaucratic largesse, is it? The government-run building is designed to achieve the highest LEED® Platinum certification from the U.S. Green Building Council and is targeted to be the GSA’s first Site Net-Zero Energy building listed on the National Register of Historic Places. A net-zero energy building is unique in that it only considers energy usage over the course of the year. During the day, it may produce an excess of energy on site, while in the evening the building may draw from that energy. By the end of the year, on-site energy generation balances out with energy from the utility.

“People don’t usually associate innovation with the federal government. But our industry does. We know GSA innovates and partners with the private sector for results,” says Paul E. Westlake, managing principal and a lead designer at Westlake Reed Leskosky (WRL), the Cleveland, Ohio-based architecture and engineering firm selected for the project. “GSA drives norms that have a ripple effect throughout the private sector.”

“There are a number of key pioneering aspects to this project,” says Jason Sielcken, GSA’s project manager. “From a historic perspective, the preservation work throughout the building will re-engage the volume of the spaces, open up the entire building and re-establish the original postal corridor.” Forensic work, including sampling original paint finishes, will help the renovation team develop color scheme recommendations in keeping with the building’s original paint and stain palette.

“All of this is being undertaken with sustainability in mind, incorporating today’s technology while respecting the historic fabric. As a result of our collaborative partnerships, we’ve been able to take an integrated design approach that is new to GSA,” says Westlake.

In June 2010, the GSA awarded the $12.3 million partial modernization and High Performance Green Building renovation as a design-build

contract to Dallas-based The Beck Group, which served as the design-build contractor and architect of record, with WRL providing design services.

The Beck Group is a nearly century old, fully integrated design-build company that provides both design and architecture services for global clients. WRL has been providing innovative solutions for historic preservation, adaptive reuse and workplace environments for more than 100 years. The firm serves as lead designer for the Aspinall project’s architecture, interior design, mechanical, electrical, plumbing engineering, LEED consulting, green building and historic preservation. Groundbreaking on the courthouse began in February 2011, with completion expected in January 2013.

Originally designed by renowned architect James Wetmore, the Aspinall Federal Building was constructed as a U.S. post office and courthouse in 1918. In 1939, a large extension was added to the east end of the building. The three-story structure is a multitenant professional office building housing the U.S. District Court as well as nine federal agencies.

As both an ARRA project and a working courthouse, the GSA’s Owens points to the need for speed to complete the project on time. “This is why we adopted the design-build model,” Owens says. “It was a new learning experience for us particularly because the building has to remain in operation during construction. Working with the architect and design team, we had to figure out how to do construction with people coming in and out of the building all day.”

Throughout the construction process, the design-build team has created temporary structures for the various federal agencies and departments so that they can continue doing business while their specific portion of the courthouse is being renovated. “Having the Beck-WRL team here on site from day one was a big help. We wouldn’t have been able to manage it otherwise,” Owens says.

For The Beck Group and WRL, the success of the project is all about finding the proper balance between modernization and new technologies along with historic preservation. Naturally, the scope of such a large design-build renovation project was enormous. It included structural analysis, energy-efficient roof replacement and upgrades to the building’s exterior, HVAC, electrical power, lighting, voice/data and low-voltage technologies, life-safety systems, a security system and accessibility modifications, along with renovating the lobby and other interior spaces. The Beck-WRL team also performed a building physics analysis to study space thermal comfort, natural ventilation, daylight potential, envelope thermal performance, renewable energy potential and whole-building energy performance.

With materials selection, WRL’s Westlake notes that it was important as a team to carefully consider every single material in terms of recycled content, regional manufacturer, low volatile organic compounds content, and rapidly renewable or certified wood. “For sustainability, it was key to be able to track a material’s performance all the way through the design process.”

Proposed sustainable strategies included an 115KW roof- and canopy-mounted photovoltaic array, DC micro-grids, a GeoExchange geothermal system and variant refrigerant flow systems. However, peer reviews and the historic office challenged the design-build team to scale back and reduce the sight line of the canopy. “The preservation committee felt that it was too predominant,” Sielcken says. “But to maintain the energy goals, we had to make a tradeoff, shrink the canopy back. Even more challenging was looking for other areas to reduce overall energy load, such as geothermal systems. It was really important to have a team on board to address these issues.”

Thanks to the latest in 3D BIM technology, including Revit, Navisworks and Innovaya, “as well as Beck’s integrated platform and its progressive application of technology, we were able to become a model of integrated design and to successfully collaborate with the client,” Westlake says.

An efficient use of taxpayer dollars

The GSA anticipates this green building renovation will be a template for future energy-efficient government buildings. The GSA’s Owens reports that government buildings that are renovated with sustainable technologies often see double-digit energy reductions, saving taxpayers millions of dollars each year.

“It is our goal that the modernization of the [Aspinall Federal Building] be a model of the aspirations of the American Recovery and Reinvestment Act and a symbol of American innovation in energy independence,” Westlake says. “It is stimulating to express these values in the rehabilitation of a legacy federal building that will honor traditions of the past, celebrate technologies of the present and advance sustainability for the future. There will be eloquent dialogue between the complementary contemporary work and the carefully preserved historic fabric.”