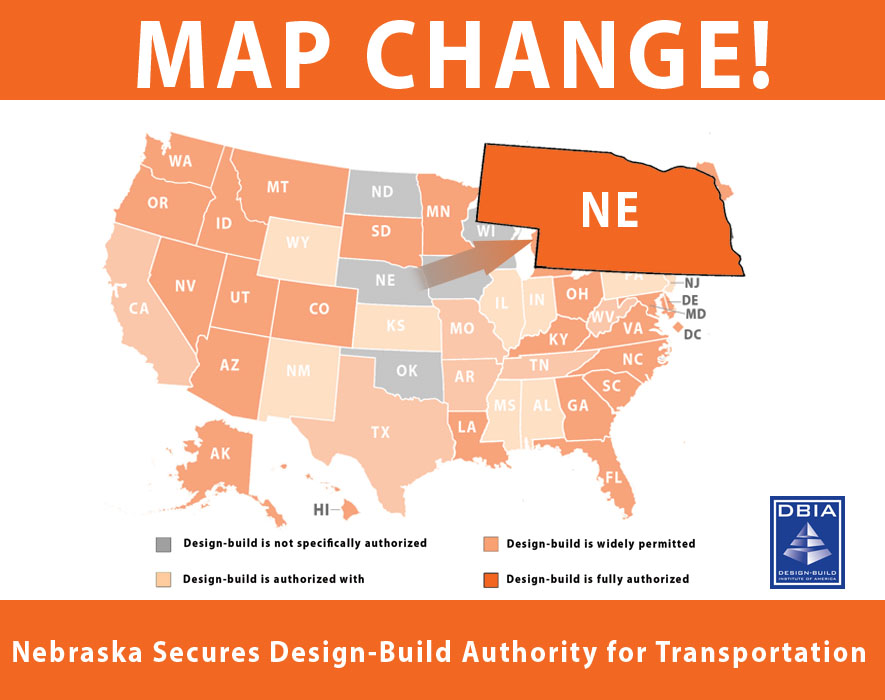 The Design-Build Institute of America (DBIA) testified in favor of the bill, and worked with the Nebraska Governor’s office and members of the state legislature to help pass it. The Nebraska Chapter of DBIA in Omaha was essential in tracking the bill, and working behind-the-scenes to win support for its passage.

Lincoln, Neb. –  The Design-Build Institute of America (DBIA), the only organization that defines, teaches and promotes best practices in design-build, celebrated the passage of The Transportation Innovation Act (L960) today in Nebraska. The bill increases funding for Nebraska transportation projects and authorizes design-build project delivery and Construction Manager/General Contractor delivery for transportation projects. Design-build is an integrated approach to project delivery that offers design and construction services under one contract with a single point of responsibility.

“This legislation will fundamentally change Nebraska’s Department of Roads for the better,” said Oretta Smith, Executive Director of DBIA – Mid-America Region, which has been working in Nebraska for years to pass similar legislation. “As Executive Director of DBIA’s Mid-America Region, I have seen design-build project delivery lead to the highest-quality transportation projects being delivered ahead of schedule in the neighboring states of Missouri, Kansas and Colorado, and I’m so excited to see Nebraska finally get this valuable tool as well. I’d like to especially thank the members of DBIA’s Nebraska Chapter in Omaha for their tireless advocacy on behalf of this legislation.”

In fact, various studies show design-build transportation projects are completed up to 36 percent faster, with up to 11 percent costs savings when compared to the traditional delivery method.

“Transportation is the fastest-growing design-build sector,” said Richard Thomas, DBIA’s Director of State/Local Affairs who testified in favor of the bill, and also serves as liaison to DBIA’s Transportation Markets Committee. “DBIA recently conducted a survey of state transportation departments and found a 600 percent increase in the amount of completed design-build transportation projects since 2002. Not only that, but 87 percent of respondents said they’ve used design-build and would use it again, and of the 13 percent who said they wouldn’t use it, lack of legislative authority was the main deterrent. Passage of this bill removes that deterrent for at least one more state.”

Governor Pete Ricketts has been a strong proponent of the bill and is likely to sign it soon. The legislation will change Nebraska’s classification on DBIA’s famous transportation design-build statute map from gray to dark orange. 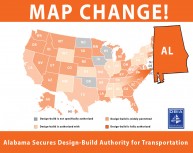 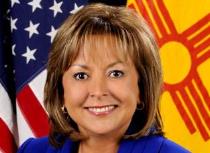