With only days left in the New York Assembly’s 2017 session, legislation for design-build authority (A.8134/S.6427) in New York City is gaining momentum.  Legislation has now passed out of the Assembly Committee on Cities and moved to the Ways and Means Committee.  That action follows a legislative push by New York City Mayor Bill De Blasio’s office in a media event just a few days earlier.  DBIA’s State Legislative Affairs Director, Richard Thomas, was also there to deliver DBIA’s strong support of this important design-build legislation:

“From the Kosciuszko Bridge to emergency work after Hurricane Irene, design-build has delivered big results in New York…except in the city. Unless lawmakers act soon, New York City will once again have to watch from the sidelines as successful design-build projects all around it deliver increased innovation and efficiencies inexplicably denied to city residents. The possibility that New York City could once again be denied billions of dollars in infrastructure savings and years in shortened project delivery time is a legislative travesty.”… Lisa Washington, DBIA Executive Director/CEO

“Trucks rumbled along the crumbling triple cantilever section of the Brooklyn Queen Expressway Friday afternoon as NYC Department of Transportation Commissioner Polly Trottenberg implored state legislators to pass a bill she believes could shave two years and millions of dollars off of critical repairs. Unless a streamlined “design-build” process is approved in the next 11 days, she argued, a long-overdue overhaul to the high-traffic roadway could get further bogged down in bureaucracy. “We really need to get moving,” Trottenberg said. “The structure is safe at the moment but it’s not something where I can wait years and years. We’ve been up in Albany for a few years now trying to make this case.”… Gothamist

With billions of dollars and years of project delivery time at stake, the City of New York and design-build advocates are rallying for support. This week we urged our area members to contact the legislative leaders before New York’s Legislative Session ends June 21: 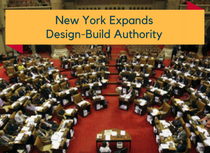