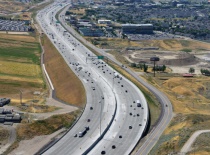 Just south of Salt Lake City located on I-15 in Utah, The Point project serves as a major commercial route that connects the Salt Lake valley to the Provo-Orem area.

Our project team consisted of Utah Department of Transportation (UDOT) as the owner, Utah County Constructors (UCC, a joint venture between Wadsworth Brothers Construction and Staker-Parson) and Wilson & Company as the designer. In order to expand capacity due to high traffic volumes, UDOT decided to add two general purpose lanes in each direction for a total of 12 lanes, reconfigure the 14600 South Interchange to a new Single Point Urban Interchange (SPUI), reconstruct two bridges at 14600 South and add new concrete pavement for seven miles of urban interstate.

View this article in the digital version of our magazine by clicking here!

With no viable detour routes in the area, one of the key project goals was to provide efficient movement of traffic during construction and maintain reliable travel times. Our team was able to achieve that goal by developing unique selection criteria that focused on limiting the duration and severity of traffic impacts.

In addition to the technical proposal and price proposal, the design-build teams were competing on “MOT Duration Values” as well. The MOT Duration Value is a dollar value assigned to alternative traffic configurations that is ultimately added to the final bid price as a “time” component. For example, each design-build team determined how long they would be in a particular traffic configuration, in each project segment, say four 11-foot lanes with two-foot shoulders, which corresponds to a MOT Duration Value of $5,000 per day. The contractor would then “bid” the total number of dollars in each traffic phase for the entirety of the project duration. These values ranged from $20,000 per segment per day to $0 based on the number of lanes in service and the corresponding project segment. During the proposal, the teams developed a detailed traffic control plan and made contractual commitments to the number of days and number of lanes that would remain open to traffic during construction.

With traffic impact minimized, construction for the Point Began with a focus on completing outside grading, retaining walls, utility relocation and storm sewer work beyond the existing I-15 pavement. Once paving operations began, we maintained at least four lanes of traffic in each direction. One phase included lane splits on I-15 to maintain the commitments to impact days. Additional lanes were opened as soon as the pavement was available to reduce the duration values during the project.

Our selection criteria called for innovative construction techniques. One of those was to use a concrete conveyor to transport concrete from a portable batch plant located in Staker-Parsons’ pit to the work zone’s center median. There it was transferred to the Portland Cement Concrete Pavement paver by end dump trucks. This innovative approach reduced the construction duration for several traffic phases, maintained four lanes and cut 15,000 truck trips on the I-15 mainline.

Collaboration among team members made it possible to adjust the contract requirements to provide the best traffic solutions. In one instance, we reduced one lane on I-15 at the congested interchange with SR-92, improving flow by eliminating weaving by traffic entering the freeway.

The Point project was a model of success, starting with selection criteria, continuing through execution and maintained by innovation and collaboration. 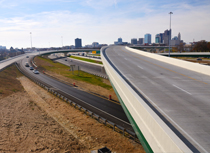