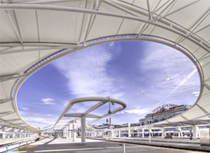 The Design Build Institute of America (DBIA), the only organization that defines, teaches and promotes design-build best practices, has announced the 2014 Project of the Year and National Award of Excellence winners. The Denver Union Station Transit Improvement Project has been bestowed with DBIA’s highest honor, Project of the Year, with Agua Nueva, Golisano Institute for Sustainability, Henry M. Jackson Federal Building Modernization and the San Diego International Airport Terminal 2 and Airside Expansion projects being specially recognized for excellence in the critical areas of design, process and teaming.

“This year’s award competition was the most rigorous to date with a greater emphasis on best practices and teamwork, as well as the successful delivery of the project,” says Lisa Washington, CAE, DBIA’s Executive Director/CEO.

Recognized for exemplary collaboration and integration in design-build project delivery, the award-winning projects were evaluated by a distinguished panel of industry experts. This year, 25 projects in nine categories were awarded National Awards of Merit. One project in each of the nine categories was then considered for best in category as a National Award of Excellence winner along with Excellence in Design, Process and Teaming awards and Project of the Year. The selected projects showcase design-build best practices, in addition to achieving budget and schedule goals and exceeding owner expectations.

The Denver Union Station Transit Improvements Project transformed 20 acres of blighted former rail yards into the vibrant centerpiece of a bustling downtown Denver, anchoring and facilitating connections between the region’s transit system with all modes of public transit: an iconic, eight-track commuter rail train hall, new light-rail station and an airy, airport-like underground bus concourse with 22 bays for regional and commercial bus service. At $374.8 million and spanning 20 acres and seven city blocks, it is the largest multimodal project to seek LEED® Silver certification from the USGBC. The project is a Public-Private Partnership (P3) successfully delivered under a design-build contract model.

“The remarkable Denver Union Station Project is a shining example of what can be accomplished through Design-Build Done Right™,” says Lisa Washington. “The project team truly took integrated project delivery to the next level by releasing design packages in alignment with construction activities, embedding lead architects and engineers in the contractors’ offices and through weekly owner/architect/contractor meetings to ensure key decision-makers were frequently engaged. We could not be more proud to present this prestigious award to the Denver Union Station Project Authority and the entire project team as DBIA’s 2014 Design-Build Project of the Year.”

The Golisano Institute for Sustainability at Rochester Institute of Technology (RIT) in Rochester, N.Y., wanted a signature building that would serve as a living laboratory for scientific discovery and experimental learning that could serve as the Western Gateway to RIT. The result is an 84,000-square-foot complex, comprised of a four-story research and three-story academic and office building connected by a four-story galleria. It houses laboratories, classrooms and office space, with high-performance design features that make it a living laboratory of sustainability. The Golisano Institute is among the first in the world to offer a Ph.D. program in sustainability.

The Governor George Deukmejian Courthouse was delivered through a unique Public-Private Partnership and is the first social infrastructure project in the United States procured under the principles of Performance-Based Infrastructure contracting. Constructed in downtown Long Beach, Calf., the design-build team successfully delivered the spectacular 545,000-square-foot courthouse and 399,000-square-foot parking facility 11 days ahead of schedule.

The Henry M. Jackson Federal Building modernization in Seattle, Wash., served to reduce the building’s energy consumption by 30 percent, increase the Energy Star score to 97 and achieve a LEED-EB Silver certification from the USGBC through multiple energy-related scopes. After shortlisting to three firms, cost and schedule were fixed to enable the teams to focus on innovative solutions to energy savings. To ensure accountability, the GSA used a performance guarantee that included one year of monitoring the Energy Use Intensity against goals established by the design-build teams, for which $1.8 million was held as retention.

DBIA 2014 National Award of Excellence by Category winners are: