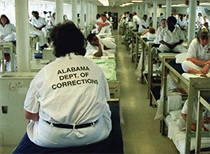 Alabama Prisons Bill Could be a Very Important Design-Build Victory

Alabama, one of just four states with serious restrictions on design-build, saw very quick movement on important legislation this week. The Alabama State Senate took an important step forward to promote design-build authority for the construction of women’s and regional prison facilities. The Senate Finance and Taxation General Fund Committee passed SB 287 by a 15-1 vote in favor of the legislation. Specifically, the bill (and its counterpart in the House, HB 313) would allow the Alabama Corrections Institution Finance Authority to construct new women’s and regional prison facilities using various types of construction agreements. Passing the legislation would be a big victory for Alabama residents, updating their procurement practices to be more open and allow more options that fit the market. Alabama residents reading this article can use this letter to their State Senator to help advocate for the bill, either by sending it or using it as a script when calling and leaving a message for their Senator.

The main support for the bill has been Governor Robert Bently (R) who held a press conference to announce its introduction in late February. According to the Governor, “Alabama’s prisons will go from being an inefficient, overcrowded system to being the best. Alabama will become a model for the rest of the nation.” In February, the bill received almost immediate support from legislative leaders including House Speaker Mike Hubbard (R) and Senate President Pro Tem Del Marsh (R). Marsh, when asked about supporting the bill stated, “you’ll find this legislature always supports efficiencies and streamlining.”

Spurred by recent riots that broke out between around 100 inmates at the Holman Correctional Facility, the legislature has clearly made the expansion of their prison facilities a top priority with design-build at the forefront of their proposal. National studies performed by the Construction Industry Institute and Penn State University have found utilizing design-build can produce project savings up to 6% and increase project delivery speed by as much as 33% when compared to the traditional design-bid-build project delivery. Saving both time and money on a project of such significance would be a victory for the Alabama taxpayer and the state as a whole.

The Design-Build Institute of America (DBIA) applauds Chairman Trip Pittman (R) and the other members of the Finance and Taxation General Fund Committee for moving this important piece of legislation forward.

DBIA’s Director of State/Local Legislative Affairs Richard Thomas, in conjunction with Alabama-based members of DBIA’s South Central Region, will be in Montgomery next week to meet with legislators and legislative staff to answer any questions they may have about design-build. Design-build is a relatively new project delivery method to the state despite it being used on nearly 40 percent of non-residential building projects nationwide, and more than 50 percent of projects over $10 million.

Again, DBIA encourages Alabama residents to use this letter to their State Senator to help advocate for the bill, either by sending it or using it as a script when calling and leaving a message for their Senator.

<< NM Expands Design-Build | Why Our Awards Mean Something >>