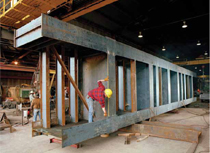 One of design-build’s key advantages is also one of its challenges. Design-build projects are commonly fast-tracked, appealing to owners, but that means practitioners must have time-saving solutions. For teams seeking the thin profile of a cast-in-place concrete system and the speed, economy and simplicity of erecting structural steel, there is a solution that doesn’t require expensive moment connections between girders and columns or introducing a forest of columns within the building footprint.

The staggered-column double-span beam framing system I devised and copyrighted in 2004, as a professional engineer at Brittingham & Associates Structural Engineers (BASE), combines the attributes of structural steel fabrication and erection to deliver an amazingly simple and cost-effective solution. The beams were used in the four-story design-build Millenia Lakes III office building, at The Mall at Millenia in Orlando, Fla., in 2007. Of course, cost savings vary according to the design parameters for each project, but in Millenia Lakes, steel costs were reduced by at least 5 percent, and erection time for each elevated level was reduced by three days.

The system works by fabricating girders to span over two column bays and connect into the sides of columns at each end of the piece. As a result, the girder spans continuously over the top of the intermediate column between the ends, creating the double-span condition for the member. Framing the girders this way puts them into double curvature that redistributes some of bending forces to the top of the girder over the columns. The result is a more efficient beam size and less deflection in the girder.

The columns frame to the underside or sit on top of girders at the middle support. But they still can be erected with lengths that accommodate two floors in most locations because the columns support the ends of the girders above and below the pass-through girder joint. By the very nature of the framing, the column-girder joint can be economically designed to resist lateral forces, which adds stability to the framing system. The ends of the double-span beams are usually designed to transfer only shear forces, but they can be designed to accept bending moments, with connections commonly used in the steel industry today. The framing very much resembles a basket weave in structural steel.

The economic impact of the system is holistic. There are fewer pieces, lighter pieces and shallower girder depths at every girder line in the building framed with the system. Yet simplicity in fabrication and erection has been maintained. And, with shallower beams, every vertical utility line in the building gets shorter, producing savings throughout the project. The advantages translate into economical solutions in steel framing for the building construction industry.

Framing of structural steel members has historically consisted of individual simple span beams connected to multistory columns via direct shear or bearing connections. The advantages of the framing system are clear:

1.    Fabrication of the steel members is simple. Commonly, the members are cut to precise length, and members are prepped to transfer or accept direct shear forces from other members. The system is conducive to bolt-up applications, with little welding either in the shop or the field.

2.    The members are easy to analyze. The routine design consists of a multitude of statically determinate members that can be sized rapidly, which was of enormous benefit prior to computerization of the design and construction industry.

3.    The erection of the structure is straightforward, with cost-effective field connections, especially when bolts can be used to their greatest extent.

While the system serves well in terms of simplicity, there are a number of issues that limit the economic viability of the framing system on some project types, particularly when compared with continuous, monolithic structures, such as reinforced or post-tensioned concrete framing. Advantages of continuous beam framing systems include:

1.    Flexural members that span continuously over supports deflect less than the commonly used simple span steel members of equal stiffness because of the reverse curvature in bending of the members. Continuous flexural members commonly have as much as a five times equivalent stiffness advantage over simple span steel members. In other words, for equal loads, equal span and equivalent stiffness, a continuous beam with fixed ends will deflect only one-fifth as much as the simple span member.

2.    Continuous beam members, with their superior deflection characteristics, normally equate to lighter and thinner structures when compared with simple span members. Given acceptable deflection criteria, structural designers can then associate member cross-sectional properties more with strength than deflection control, reducing structural depth and weight. The result is frequently shorter floor-to-floor heights, less skin on the perimeter of the building, reduced costs in vertical utility lines and elevator runs, lower total base forces from lateral loads (though not always) and a lighter structure.

3.    In the past, several methods have been used to modify steel to act continuously. Historically, continuous beam behavior with structural steel has been accomplished using moment connections at beam and column intersections. Rigid or semi-rigid connections also provide lateral force resistance to steel frames. The rigid or semi-rigid connections are applied at the interface of the beams and columns, but they significantly increase cost and thus are not commonly used to reduce the depth of steel structures.

The staggered-column double-span beam framing system is a structural steel framing approach that incorporates the advantages of economical fabrication and continuous framing of flexural floor members. The system configuration incorporates a row of columns that alternate from one story in height to two stories in height (staggering up and down), allowing beams to span continuously (double span) over every other column. Use of this framing layout would normally occur along girder lines, with conventional simple span filler beams framing into them. The advantages of the system follow:

1.    Commonly, fewer pieces are encountered, depending upon the framing layout. Fabrication of the steel members remains simple and the system is also conducive to bolt-up applications, with little additional welding either in the shop or the field when compared with simple span framing systems.

2.    The maximum moment in the beam typically shifts to the support over the column that forms the center support under the beam. The magnitude of the moment will vary, depending upon beam loading and the length of the spans to both sides of the intermediate support. The beam framing qualifies for redistribution of moment per Appendix 1, Section 1.3, of the 13th edition of the AISC Steel Construction Manual. Even higher moments at the middle support can be handled by the addition of reinforcing steel in the slab for composite beams, increasing the beam stiffness and reducing the depth and weight of the double-span beam. Thus shorter floor-to-floor heights can be achieved more economically than with conventional simple span beams.

3.    As with simple framing, the erection of the structure is straightforward, with cost-effective field bolt-up connections and fewer picks of the crane. The result is a steel frame that erects as quickly as conventional steel framing.

4.    The framing is especially well suited for resistance to progressive collapse of steel structures, through utilizing the Alternate Path method. Stability is satisfied when any one column is removed from any location within the profile of the frame. In fact, even greater strength, serviceability and stability can be obtained, if needed, by the addition of beam-to-column moment connections at the ends of the pass-through beams.

5.    AISC defines the pass-through beam to column connection as a fully rigid (FR) connection. The layout of the framing inherently resists lateral loads, providing greater stability to the frame even during erection.

The design-build project delivery system challenges teams and rewards them for innovation and achievement. Staggered-column double-span beam framing gives the design-builder another means of targeting and hitting a bull’s eye.

G.M. “Mac” Brittingham, P.E., is the founder and president of Norcross, Ga.–based Brittingham & Associates Structural Engineers. The firm is well versed in all major building types and specializes in design-build projects. A version of this article appeared in the December 2010 issue of Modern Steel Construction magazine.